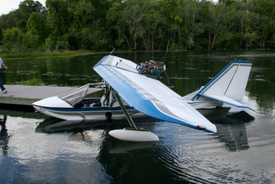 Sayville, NY (NewYorkInjuryNews.com) – A small aircraft crashed in Long Island off the Sayville shore where it landed in shallow water before 1 p.m. on Saturday, January 9, 2010, according to WCAX.

Suffolk County police responded to the wrecked aircraft and upon their arrival, they found that the two victims were still alive. The aircraft lay belly-up with he nose of the plane buried under water and its tail up in the air. The plane had crashed about 30 feet from Sayville shore and emergency medical services (EMS) showed up to assist.

There were two men traveling in the single-engine plane at the time it plummeted to the ground. Even though it appeared the two men were surprisingly unharmed in the aviation accident, they were transported to an area hospital to be evaluated by doctors and nurses. Their identities were not disclosed. The small aircraft was identified as a 1946 Stinson Voyager.

Investigators learned that the plane had departed from Bayport Aerodrome at 12:55 p.m. that day when the two men discovered they were having engine trouble in mid-air. The pilot then attempted to land the plane in the area. The plane, instead, crashed into the water.