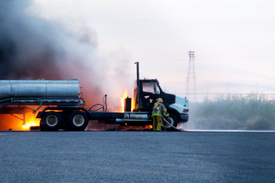 Catskill, NY (NewYorkInjuryNews.com) — New York State police reported to the scene where a semi truck struck a parked big rig on the Thruway and burst into flames around 4 a.m. Monday morning, January 11, 2010, according to Albany Times Union.

It was reported that one tractor-trailer had been parked on the side of the Thruway when another semi truck came barreling down the road and violently rear-ended it. The big rig then swerved off the road and flipped over bursting into flames. State police reported that the fatal crash had taken place in the southbound lanes near Exit 21, 35 miles south of Albany.

Eyewitnesses raced to the aid of the trapped truck driver surrounded by flames in the cab of the wrecked rig. As the people quickly tried to free him from the cab, the flames and intense heat pushed them away.

Tragically, the unidentified truck driver of the rig was declared dead at the scene by the Greene County coroner. Police identified the driver of the parked semi truck to be Frang Tushaj, who remained uninjured in the big rig accident. The fatal semi truck wreck forced police to close both sides of the highway. It was reported that the lanes on the northbound side were reopened to traffic at 8 a.m. The southbound traffic lanes remained closed for eight more hours for accident investigators to probe the scene of the fatal wreck.