Woman killed by forklift in Brooklyn 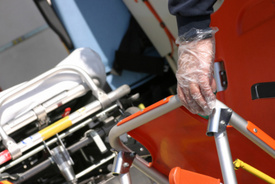 Brooklyn, NY (NewYorkInjuryNews.com) — A woman was fatally injured after being struck by a forklift Tuesday morning, January 5, 2010, according to WABC.

New York Police Department (NYPD) officials are probing the scene where the heavy piece of machinery brutally killed a 46-year-old woman at the intersection of Avenue M and East 14th Street at 7:40 a.m. Police reportedly identified the victim as Rosemary Pratt through eyewitnesses.

Police took note that quarters were found scattered all over East 23rd Street. Some witnesses believed that Pratt had been running to catch the bus when she was struck. Others believed that she had been walking down the street on the southbound side when it occurred.

EMS loaded Pratt into an ambulance and rushed her to Kings County Hospital. Pratt’s injuries proved fatal upon arrival, where medical officials pronounced her dead. The driver of the forklift remained at the scene. The driver was only identified as a 40-year-old driver. The driver was not arrested by responding police, but was issued several citations after they discovered he had equipment violations on his record.

Accident investigators continued at the scene to determine what caused the fatal and freak incident that took the woman’s life.