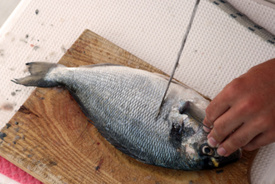 New York, NY (NewYorkInjuryNews.com) — The government Food and Drug Administration (FDA) www.fda.gov announced that Bao Ding Seafood of New York, NY recalled Boiled Horse Mackerel on January 6, 2010, due to potential contamination with clostridium botulinum, which is a bacteria that can be deadly if consumed.

Bao Ding Seafood warns consumers to not consume this product, regardless of whether it smells or looks unspoiled. The recalled Boiled Horse Mackerel was sold in a vacuumed plastic bag, and weighed 450 grams. The contaminated product was sold throughout the state of New York.

The contaminated food was uncovered by New York State Department of Agriculture and Markets http://www.agmkt.state.ny.us/ food examiner, who was performing a routine inspection and was analyzing the products with food lab personnel, when they found that the fish were not disemboweled before the process. All consumers who have purchased this food are advised to return it to the place of purchase. Do not eat it.

When this bacteria is consumed, it is called Botulism, a severe, dangerous form of food poisoning. The symptoms that come along with Botulism are a weakness, double-vision, trouble speaking or swallowing, trouble breathing, dizziness, abdominal distension, and constipation. All people who have purchased and consumed the seafood and have been experiencing these symptoms, seek medical attention as soon as possible.

There have not been any illnesses or deaths pertaining to this contamination problem. For questions about this matter, contact the Jenny Lin at 212-965-9738.