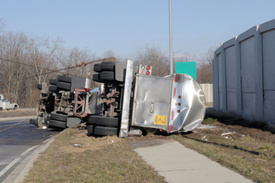 Legal news for Massachusetts truck accident attorneys—A semi truck flipped over in front of a Beverly bed and breakfast.

Beverly, MA(NewYorkInjuryNews.com) – Police reported to the scene where a Mack truck flipped over in Beverly, in front of a bed and breakfast on Hart Street Thursday morning, January 7, 2010, according to WHDH-TV.

The operator of the 18-wheeler was injured and traffic was delayed due to the accident. Police closed the street for investigative purposes, and to clean up the wreck. Massachusetts police reported that the right tires of the rim appeared to have blown out, when the big rig flipped over while navigating a curve in the road. Emergency medical service (EMS) arrived at the scene in front of Vine & Ivy Bed and Breakfast.

The driver, identified only as a 60-year-old from Brentwood, New Hampshire, was taken to Beverly Hospital to be treated by doctors and nurses for minor injuries. Clean up crews put the semi truck upright around 12:30 p.m. The owner of Vine & Ivy Bed and Breakfast, told sources that the truck was speeding around the corner, where the speed limit is 20 miles per hour. He also commented that the trucks of this particular company consistently fly around the corner of Hart Street.

The semi was owned by Bentley Warren Trucking located in Ipswich. Officials reported that Hart Street was likely to reopen Thursday afternoon. Local police departments are probing the scene of the crash to determine if speed was a dominant factor in the truck accident.