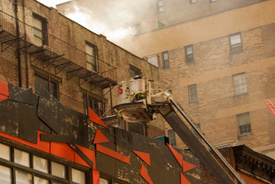 Brooklyn, NY (NewYorkInjuryNews.com) – Five firefighters were injured and a beloved great-grandmother’s life was claimed in a East New York apartment blaze on Thursday night, December 31, 2009, according to the New York Daily News.

The 5 a.m. blaze engulfed the apartment building, which began on the second floor of the apartment on Sheffield Avenue. The blaze quickly spread to 81-year-old Araselia Seguie’s apartment, where she failed to escape the inferno. Her family escaped safely out of the fiery home.

The family’s great-grandmother had become trapped in her third floor apartment, while the children, the family dog, and the other family members quickly ran to avoid the searing flames and billowing smoke. The family had fled from the deadly flames through a neighbor’s apartment, and then went down the fire escape to meet the responding firefighters.

Firefighters ran into the burning building to search out any surviving victims of the blaze. Grandma Seguie was found and declared dead at the scene. New York City Fire Department (FDNY) officials reported that the fire did not appear to be intentional. The five firefighters who were injured remained unidentified. One suffered from second-degree burns. Investigating fire marshals are looking into a residents claim that faulty wiring was a factor involved in the inferno.