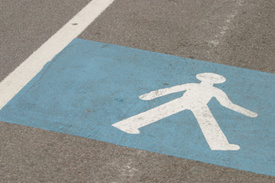 Legal news for New York personal injury attorneys–A pedestrian was in critical condition after a car accident in Schenectady, NY.

Schenectady, NY (NewYorkInjuryNews.com) – A tragic incident involving a pedestrian occurred when a car struck him while he was crossing the street on Sunday morning, January 4, 2010, according to Albany Times Union.

New York police and emergency medical emergency services (EMS) rushed to the scene of the serious incident. Police reported that the male pedestrian had been walking across Erie Boulevard at the intersection of Union Street when the accident occurred.

An EMS trauma helicopter arrived and flew the injured man to Albany Medical Center, where he was treated by doctors and nurses. He was reportedly in critical condition for a potential traumatic brain injury (TBI). The name of the male victim was not released. Police reported that the incident occurred at 6:30 a.m. The drivers name was not released.

Investigating police officials reported that they asked the driver several questions regarding the accident. Police continue to probe the accident to determine all the possible factors involved. In 2008, the New York State Department of Motor Vehicles recorded 15,620 fatal pedestrian-car accidents. There was 20,510 pedestrian accidents, which involved occupied motor vehicles.