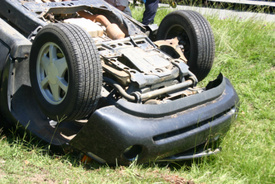 Worcester, MA (NewYorkInjuryNews.com) — Massachusetts police reported to the scene where a Worcester man collided with a driver going to wrong way on the Massachusetts Turnpike in Boston, Sunday, December 27, 2009, announced the Worcester Telegram.

The Worcester man was traveling with a passenger who was fatally injured the tragic wreck. Emergency medical services (EMS) arrived at the scene to transport the survivors who were injured. Police reported that the crash took place shortly before 2 a.m. Sunday morning in the eastbound lanes of the pike near Prudential Center tunnel.

The driver who was traveling in the wrong lane had been charged with operating a motor vehicle under the influence. EMS transported the Worcester driver, identified as 49-year-old Rene Bronfield, to Massachusetts General Hospital to be treated for his injuries by doctors and nurses. His serious injuries remain unspecified.

The passenger in Bronfield’s vehicle was not identified. The driver, who collided with Bronfield, was identified as 33-year-old Philip Daniels, of Boston, who appeared in court for charges of drunk driving and vehicular manslaughter. He pleaded not guilty. He is rescheduled to appear in court in January 2010.