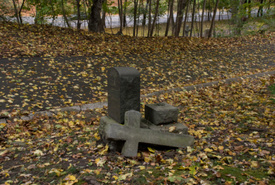 Chatham Township, NJ (NewYorkInjuryNews.com) – A teenager crashed into another vehicle after running a red light and crashed into a cemetery, Wednesday afternoon, 5:30 p.m. December 30, 2009, according to NJ.com.

Chatham Township police and emergency medical services (EMS) reported to the scene to investigate. Police reported that the motor vehicle accident occurred at the intersection of Shunpike Road and Noe Avenue. Responding officials identified the teenage driver of the vehicle that ran the red light as19-year-old Karlem Siviragimenez, who was issued a ticket for careless driving.

Siviragimenez had been heading north down Noe Avenue when 40-year-old Walter Long Jr. was traveling west down Shunpike Road, when Siviragimenez failed to stop at a red light. The vehicles collided and sent Siviragimenez vehicle in the St. Vincents Cemetery.

Chatham EMS transported both drivers to be treated at the Overlook Hospital. It was not reported if thy sustained serious injuries. One of Siviragimenez’s passengers refused medical treatment. Both damages involved in the crash were towed from the scene. Police continue to investigate the motor vehicle accident.