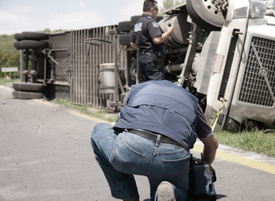 Legal news for Pennsylvania truck accident attorneys – HAZMAT officials reported to the scene of a truck spill on the I-80.

The Pennsylvania Department of Transportation (PennDOT) reported that the tanker spill closed the road from exit 35 to exit 42 of the Interstate 80, 75 miles northeast of Pittsburgh in Venango County.

Crews reopened the westbound lanes Thursday morning. The Department of Environment Protection (EPA) www.epa.gov reported that the 4,200 gallons of chemical that spilled is very corrosive and is traditionally used to etch glass. It spilled over one-fourth of a mile as the truck operator attempted to bring the vehicle to a halt.

Police and other official investigators are looking into what caused the tanker to split in half on the highway. HAZMAT and another environmental company were on the scene to neutralize the chemical.

The teams were at the scene to probe the berm to determine if the chemicals had spilled off the sides of the road. PennDOT authorities advised all drivers in the eastbound lanes to keep their windows closed while driving to avoid any contact with the hazardous materials. As of yet, there have not been any reports of injuries, illnesses or evacuations. The investigation continues.
Bridget Hom