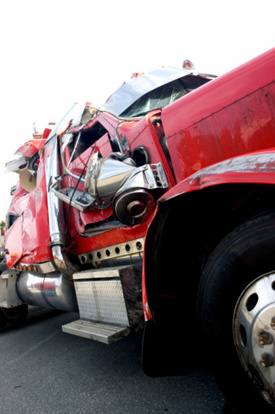 Middletown police and emergency medical services (EMS) reported to the scene where the two semi’s were sitting in the middle of the intersection leaving one truck driver was trapped in his cab.

Investigating police determined that both big rigs were heading northbound on Del. 301 when the 2008 Volvo tractor stopped at a red light and the 2004 International tractor from D&C Trucking did not see the stopped rig in front of him. He attempted to swerve into the southbound lanes to avoid a wreck with the Volvo semi. In the process, he struck the rig with the passenger side of his vehicle on the driver’s side.

The operator of the International tractor, identified as 43-year-old Charles Holland, was trapped in the closed cab of his rig while the driver of the Volvo, 50-year-old Calvin Reid, remained uninjured. Holland’s passenger side of his vehicle was crushed due to the collision.

The semi ended up in the southbound lanes leaning against the guardrail. Holland was extricated from the wreck by responding officials. He was transported via helicopter to Christiana Hospital where he was treated by doctors and nurses for severe injuries. Medical officials reported Holland to have suffered broken ribs, a serious wound to his arm, and a potential traumatic brain injury (TBI).

He was listed as stable. The roads were shut down for four hours while crews cleaned up the wreckage of the crash. Police cited Holland for inattentive driving.