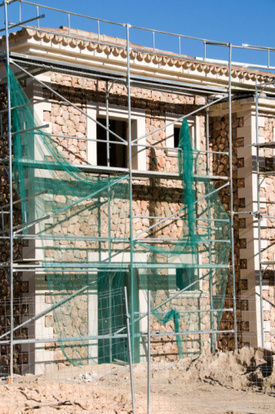 Westbrook, ME (NewYorkInjuryNews.com) – There was four construction workers who were transported to the hospital for severe injuries after the scaffolding collapsed, December 2009, according to News 13.

Police and emergency medical services (EMS) rushed to the scene on Forest Street in Westbrook, where the scaffolding collapsed. Maine police officials reported that the four workers were in the process of replacing shingles on the roof of a brand new apartment, when the metal suddenly gave way and the four workers plummeted 20 feet to the ground. Investigating officials believe that the scaffolding was not secured to the building properly.

The four workers standing on the scaffolding exceeded the required weight limit. EMS transported the four workers to local hospitals to be treated by doctors and nurses. Their injuries were not specified. All of the unidentified employees worked for Pierce and Sons Construction in Hollis.

The government organization, The Occupational Safety and Health Administration (OSHA) www.osha.gov continues to investigate the serious construction accident to determine what happened. According to Wikipedia, OSHA is an office within the Department of Labor, which functions to prevent work-related injuries, illnesses, and work-related fatalities by enforcing government rules and regulations for workplace safety and health.