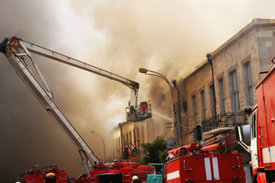 Boston, MA (NewYorkInjuryNews.com) — A two-alarm blaze injured two Boston firefighters Wednesday morning, December 30, 2009, according to the Boston Globe. Boston firefighters rushed to the scene of a blazing condo that was under construction in Jamaica Plain. Black smoke billowed and flames grew from the three-story condo, which caused it to collapse.

One firefighter from Ladder 23 was inside when the condo collapsed and was taken to Brigham and Women’s Hospital to be treated for a fractured collarbone and facial injuries.

The veteran firefighter remained unidentified. Medical officials said that his injuries were not life-threatening. Another firefighter sustained injuries battling the blaze. He suffered a shoulder strain and was taken to the hospital and was later released.

The first firefighter had been injured when he was searching for victims in the condo when it collapsed. The fire reportedly caused $100,000 in damages. The department’s Fire Investigation Unit continues to investigate to determine if the fire was linked to acts of arson that have occurred on Sigourney Street. The fire was determined to have started on the second floor of the condo. Investigators are still not clear about what caused this condo fire.