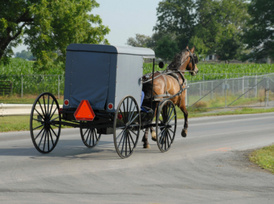 Gorham, NY (NewYorkInjuryNews.com) – New York authorities reported to the scene where a car had collided with a Mennonite family in their buggy Sunday, December 27, 2009, according to WCAX.

Police reported that the family of four had been traveling down a rural road in upstate New York when a car struck their buggy around 8:30 a.m., 60 miles south of Rochester.The Ontario County sheriff’s and emergency medical services (EMS) reported to the scene where the four Mennonite family members had been ejected from their carriage. Police reported that the family was violently ejected from the buggy due to the force of the crash.

The police later identified two of the injured women as 49-year-old Mable Martin and 14-year-old Judith Martin. Both family members were transported to a local hospital via trauma helicopter to be treated by doctors and nurses for their wounds. Both women suffered from potential traumatic brain injuries (TBI). The other adult passenger and young female passenger were taken to the hospital via ambulance. The extent of their injuries was unclear.

Police stated that the driver of the car reportedly could not see the buggy due to the glare on his windshield. The investigation continues.