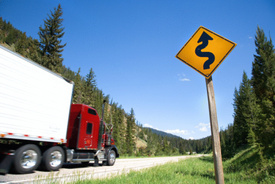 Pennsville Township, NJ (NewYorkInjuryNews.com) – Emergency medical services (EMS) and police rushed to the scene where a tractor-trailer collided with a small sedan on Route 49, Monday, December 28, 2009, according to Today’s Sunbeam.

Route 49 was closed for more than an hour so that the scene of the accident could be cleaned up. Police reported that the small vehicle had suddenly crossed the yellow line and a tractor-trailer collided with it, injuring the driver. The crash occurred around 5:22 a.m.

The two-vehicle collision sent the driver of the sedan to the hospital to be treated by doctors and nurses for injuries. Responding police authorities identified the victim as 76-year-old Richard Page of Pennsville. The operator of the semi truck was identified as 72-year-old Joe Huss, resident of Roanoke, N.C., who reportedly attempted to avoid the collision, but struck the back of the vehicle then crashed into a tree.

EMS transported Page to The Memorial Hospital located in Salem County. His injuries were not specified. Huss remained unharmed in the collision. Police issued Page a citation for failing to maintain lane summons.