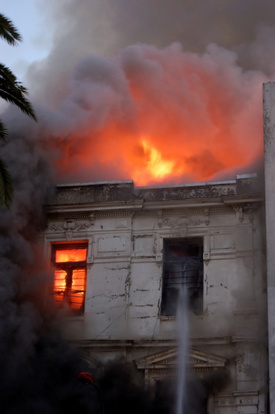 Fire engines rushed to the scene where a vacant house located at 400 block of S. Robinson Street was reportedly burning to the ground at 8:54 p.m. Monday night. Firefighters arrived to find the building totally engulfed in flames and acrid black smoke pouring out from every side of the house.

Chief Kevin Cartwright reported that the Canton row house sustained serious damages and that most of the flames were on the second floor of the two-story house. The back side of the house had also collapsed due to the damages. The fire also reached a nearby structure, which was not occupied at the time. The blaze was reported to be under control at 10:10 p.m.

Emergency medical services (EMS) arrived at the scene. One of the City firefighters was injured while battling the house blaze. He was transported via ambulance to John Hopkins Medical Center to be treated for burns to his face and ears. The unidentified firefighter was released after doctors treated his injuries. Fire officials continue to investigate the scene to determine how the blaze had started.