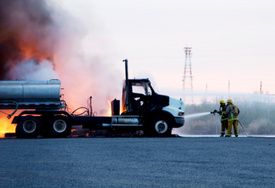 Ludlow, MA (NewYorkInjuryNews.com) – A tractor-trailer burst into flames which closed the Massachusetts Turnpike and caused major traffic jams, December 21, 2009, according to ABC40.

Massachusetts State troopers arrived at the scene of the fiery wreck. The truck had become fully engulfed in flames in the eastbound lanes of the Massachusetts Pike shortly before 4 a.m.

There were no other vehicles involved in the fiery accident and police are not sure what caused the semi truck to catch fire. All of the eastbound lanes were immediately closed off from all other traffic. Ludlow firefighters responded to the highway blaze and upon arrival, quickly extinguished to climbing flames on the tractor-trailer.

The operator of the truck was identified by troopers as Mark Pieck, of Watervilet, New York. Miraculously, Pieck had escaped the truck before the flames consumed it. Pieck appeared uninjured. After the truck was extinguished, CJ’s Towing Company sent a tow truck which removed the damaged big rig from the highway.

Police reported that one of the eastbound lanes was reopened an hour and a half after the fiery wreck to relieve some of the traffic congestion. All lanes of the Massachusetts highway were open for normal traffic flow shortly before 10:30 a.m.