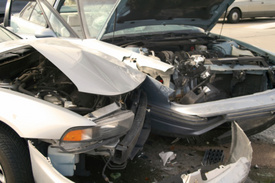 New Hartford, NY (NewYorkInjuryNews.com) — New York police reported a three-car pileup in front of a Burger King in the eastbound lanes of the Seneca Turnpike.

Police reported that the wreck began when 20-year-old Rochester resident, Amina Purak, crashed into traffic in front of her, when she failed to notice the stopped cars. She rear-ended the back of 63-year-old Earnest Cavalier’s vehicle, which was launched into the vehicle in front of him. Angela Fistick, 27, drove the third vehicle involved in the wreck. Cavalier and Fistick complained of pain in their necks from the collision.

Emergency medical services (EMS) arrived at the scene to assist police and transport the injured to the hospital for treatment. Cavailer and Fistick were taken via ambulance to Faxton/St/ Luke’s Healthcare to be treated by doctors and nurses for their minor injuries. Both Purak’s and Cavailer’s damaged vehicles had to be taken away via tow truck from the scene of the crash. Responding police issued Amina Purak a ticket and assigned her a court date for her traffic violation.