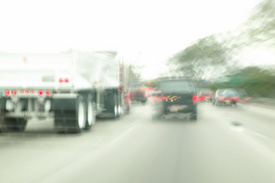 Londonderry, NH (NewYorkInjuryNews.com) – A pickup truck reportedly swerved over the median and collided with a tractor-trailer on Route 102, Thursday morning, according to WMUR.

New Hampshire police reported to the 1 a.m. crash to find a 2007 Mack tractor hitched to a 2002 Polar tanker trailer that was struck by a 2006 Ford F-150 in Londonderry. Officials reported that the tractor-trailer was traveling in the eastbound lanes when it was struck by the pickup truck that had jumped out of the westbound lanes, and crossed the median.

Police identified the driver of the pickup truck to be 27-year-old Jason Babbidge, of Londonderry, who was traveling alone when the crash occurred. He was taken via ambulance to Southern New Hampshire Medical Center for non-life threatening injuries. The operator of the semi truck was identified as 37-year-old Craig Litalien, who is an employee of Fred Fuller Oil Company Inc. He remained uninjured in the crash.

Route 102, also known as Nashua Road, was closed until 5:30 a.m. following the collision. Police arrested Babbidge for driving under the influence of alcohol, and he has since been released on bail and is scheduled to be in court January 5, 2010. Londonderry police continue to investigate the collision.