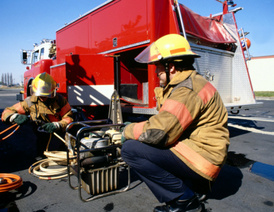 New Brunswick, NJ (NewYorkInjuryNews.com) – Responding firefighters arrived to see flames and black smoke billowing out of a 2-story home where one firefighter and a resident were injured Sunday morning, December 13, 2009 according to the Star-Ledger.

They were both taken via ambulance to St. Barnabas Burn Center located in Livingston, where doctors and nurses treated them for burn injuries. Their injuries were not specified. It was not reported if any other residents were rescued from the burning house. Fire officials continue to investigate to determine what caused the blaze.