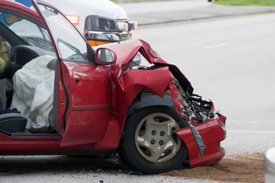 Shelton, CT (NewYorkInjuryNews.com) – Police and emergency medical services (EMS) reported to the scene of a 58-vehicle pileup that occurred Sunday, December 13, 2009, according to WSFB.com.

The massive chain-reaction crash took place on an icy afternoon around 12:20 p.m. on Route 110 involving dozens of cars, trucks and SUV’s. Police reported that one of the main factors taken into account for the crash was that the falling rain had quickly become freezing rain, creating a sheet of ice over the road.

Emergency medical services (EMS) from the surrounding areas responded to the serious accident that injured 46 people. Six of the injured were transported via ambulance to local hospitals to be treated by doctors and nurses for their non-life threatening injuries.

Police reported that a makeshift shelter had been created at the Shelton EMS facility located on Meadow Street for those who were injured or involved in the wreck. Shelton Road was open for through traffic again at 5:30 p.m., hours after the massive pileup. Police officials continue to investigate the 58-vehicle crash.