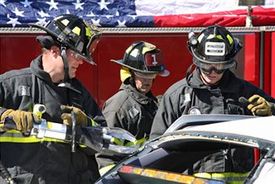 Raritan,NJ (NewYorkInjuryNews.com) – A state police officer was cruising in his squad car when he collided with another vehicle in Raritan Township, on Tuesday, December, 1, 2009, according to Hunterdon County Democrat.

The state police officer collided with an elderly man driving on Route 12 east of the County Complex. The crash took place in front of Ubel’s Garden Center. Firefighter rescue teams arrived at the scene of the crash where they had to extricate one of the drivers from his damaged vehicle.

The state trooper’s cruiser sustained heavy damage in the collision. The crash occurred right before afternoon rush hour and caused serious traffic delays. Police directed traffic to Route 579 as a temporary detour for motorists that had been traveling east, according to Hillsborough Area Regional Transit (HART).

The state police officer’s vehicle was identified as a cruiser of the Kingwood station of the State Police Department. Police officials on the scene reported that both men sustained non-life threatening injuries in the crash. Their identities were not released.