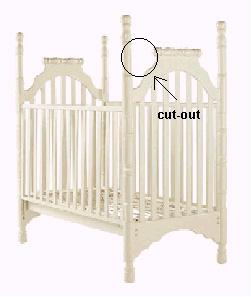 Cranberry, NJ (NewYorkInjuryNews.com) – The United States Consumer Product Safety Commission (CPSC) www.cpsc.gov in cooperation with LaJobi Inc., announced the voluntary recall of “Molly” and “Betsy” cribs due to an entrapment and strangulation hazards for babies and toddlers, on December, 2, 2009.

Those parents and caregivers who have purchased the 2001 cribs at participating stores, as well as thrift stores, are advised to discontinue use immediately. The first recall of the defective cribs involved 400 cribs, and was first announced December 2001.

The cribs were manufactured in Cranbury, New Jersey, and were recalled due to the hazard of the cut outs on the panels, that would permit young children inside the crib to trap their heads and could strangle them. There was one injury reported to the CPSC about the tragic fatal injury of a 1-year-old baby girl, whose head became caught in the headboard cut-out “Betsy” crib. The accident occurred in Mississippi in 2003 after the recall.

The wooden cribs are made with opening on both ends of the crib, and both cribs have “Betsy” or “Molly” printed on the end panels. The models and numbers can be located on the head panel. The cribs were made in Italy and were sold in juvenile stores across the nation from May 2000 through September 2001, for $700 for “Molly” and $650 for “Betsy”. This alert is the second announcement by the company to inform consumers of the dangers of these cribs.

All consumers are encouraged to discontinue use of the cribs and contact Lajobi at (800) 266-2848 before 5 p.m. Monday through Friday, or visit them on their website at www.Lajobi.com to remedy the product.