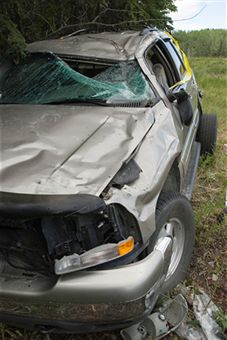 Methuen, PA (NewYorkInjuryNews.com) — A man from Lawrence suffered minor injuries after his Sport Utility Vehicle (SUV) rolled over on Route 213 on Friday, November, 20, 2009, according to the Eagle Tribune.

Police and emergency medical services (EMS) arrived at the scene of the damaged vehicle during a morning downpour. Pennsylvania State Troopers from the Andover barracks responded to the accident around 10:25 a.m. Police reported that the SUV had been traveling in the eastbound lanes on Route 213 heading toward Interstate 495 when the driver suddenly lost control, and the gray 2006 Chevy Trailblazer rolled several times near the Howe Street exit.

The driver was identified as 37-year-old Felix Colon, of 28 Arlington Street.

EMS transported Colon via ambulance to be examined and treated by doctors and nurses as a safety precaution. He was transported to Lawrence General Hospital. Police said that he only appeared to have sustained minor injuries in the crash.

Firefighters of the Methuen Fire Department were also on the scene. The SUV had to be towed from the scene of the accident.