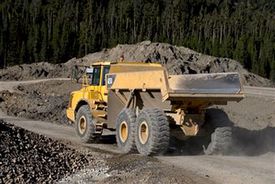 Staten Island, NY (NewYorkInjuryNews.com) — A 10-wheeled dump truck rolled over a Staten Island construction worker, which crushed to death when the truck backed over him on Friday, November 20, 2009, according to the Staten Island Advance.

The worker was struck at the intersection of Richmond Avenue near Rockland Avenue in New Springville, when the worker was standing behind the white Mack truck. The worker could not be seen through the co-workers side mirrors.

The driver began to back the truck up, knocking the worker down, and then rolled him over by both the rear wheels and the front wheels crushing and fatally injuring the workman, identified as 53-year-old Jody Reese, of Tottenville. The serious accident occurred around 2:20 p.m.

Emergency medical services (EMS) rushed to the scene to resuscitate the severely injured worker. An ambulance rushed him from the scene to Staten Island University Hospital in Ocean Breeze. Doctors pronounced that his injuries proved fatal at 3:10 p.m. Responding police reported that they felt this was a tragic accident.

The truck driver, who was also the workman’s co-worker, declined to comment due to the shock and trauma of the accident. Construction work continued on the site that afternoon after the tragic incident. The southbound traffic lanes of Richmond Avenue were temporarily shut down for police to investigate the scene of the accident.