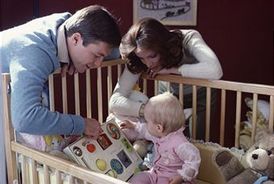 The CPSC strongly advised caregivers and parents to discontinue use of the cribs and request a free repair kit. The cribs pose potential entrapment and suffocation hazard for small children.

Parents are urged to find another safe place for their babies to sleep until the crib is fixed with the company repair kit. The drop–side cribs have the potential to break, deform, or parts can become missing. When the drop-side is detached, it creates a space where any infant or toddler can become trapped leading to suffocation of the child.

Stork Craft Manufacturing Inc., of British Columbia and Canada has recalled 1,213,000 units distributed in the United States and 968,000 units circulated in Canada. There were a reported 110 incidents correlated to the drop-side attachments; there have been 67 incidents in the U.S, and 43 in Canada.

The cribs were sold at: BJ’s Wholesale Club, J.C. Penney, Kmart, Meijer, Sears, USA Baby, and Wal-Mart stores. They were also sold online at: Amazon.com, Babiesrus.com, Costco.com, Target.com, and Wa-Mart.com for the cost of $100 and $400. To learn more concerning the cribs, contact Stork Craft at (877) 274-0277 to order the free repair kit, or online at www.storkcraft.com.