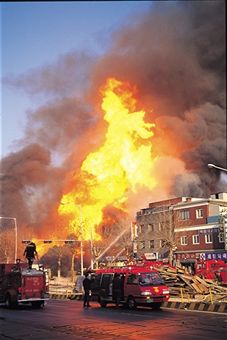 Firefighters reported to the scene at 3:30 a.m. at 227 Normandy where the house was a blazing inferno with billowing smoke, reported Deputy Chief Scott Williams.

Firefighters began to battle the relentless flames inside and out of the house. One firefighter was injured when he ventured inside the attic and plummeted down the staircase in thick smoky conditions. Emergency medical service (EMS) transported the injured firefighter to a local hospital to be cared for by doctors and nurses. The firefighter’s injuries were not specified.

Rochester firefighters quickly contained the blaze in 35 minutes. The fire greatly damaged the back end of the house, especially the attic and the roof. Chief Williams believed that the fire began from the outside of the vacant house then spread quickly into the attic.
The firefighters reported that they believe that house had been intentionally lit on fire. The blaze continues to be investigated to determine the cause.