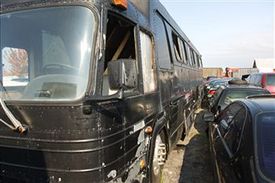 Police and emergency medical services (EMS) arrived at the scene. The collision took place Monday evening around 10 p.m. in rainy conditions. Local Fire Department firefighters responded to the scene to assist. The collision occurred at the intersection of Franklin Square and Abigail Drives, across from the Franklin Square Hospital complex near Rosedale.

Baltimore County officials stated that the Maryland Transit bus crashed with a passenger vehicle, which then rolled the bus off the road into the embankment. Eight people reportedly needed medical attention. Four were transported by ambulances to the Franklin Square Hospital close by. Another four victims were taken via ambulance to be treated by doctors and nurses at John Hopkins Bayview Medical Center.

It was not reported how many people were in each vehicle at the time of the crash. Medical officials did not release the conditions of the injured people. Baltimore County police and MTA authorities continue to investigate the serious crash.