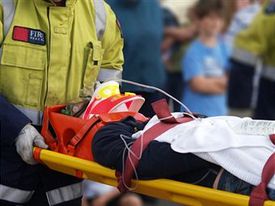 Emergency medical services (EMS) responded to the scene of the serious accident. It was not reported if there were other workers, or if the worker was wearing proper safety attire on the site. The worker had reportedly plummeting from the exit ramp and fell onto some scaffolding injuring his back.

EMS immobilized the injured worker on a medical board and hoisted him up in a basket to go to a local hospital where doctors and nurses would treat his injuries. The worker remained unidentified.

The lanes of traffic were slowed due to the construction accident. It was not reported if New York Police Department (NYPD) were present at the scene. The Occupational Health and Safety officials (OSHA) www.osha.gov will investigate the accident to determine what caused the worker to fall on the Throgs Neck Bridge.

According to Wikipedia, New York City’s Throgs Neck Bridge is a high suspension bridge that connects traffic traveling on Interstate 285 over the East River to meet Long Island Sound. The huge Bridge also connects traffic from the Bronx with the Bayside of Queens.