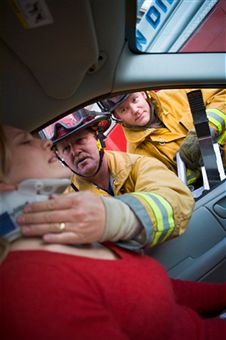 Jackson, NJ (NewYorkInjuryNews.com) – A Ford Explorer was mangled in a crash with a school bus that injured three people on Friday, November 20, 2009, according to the Asbury Park Press.

The traumatic collision occurred where a school bus, transporting 45 elementary students, pushed a Ford Explorer 100 feet before both vehicles came to a halt. Police, emergency paramedics, and Firefighters rushed to the scene where the driver of the SUV was found critically injured along with the SUV’s two passengers. Two students on board the bus also sustained injuries that proved minor.

The crash occurred at 8:46 p.m. on West Commodore Boulevard when the Ford Explorer was turning out of Larry’s Auto Body shop, when the school bus crashed into the SUV and continued to push the vehicle with the three people inside.

The driver of the Ford Explorer, identified as 20-year-old Tony Russo Jr., was airlifted to Jersey Shore University Medical Center for treatment. The two passengers traveling with him— his father and his grandmother, 67-year-old Danielle Russo, were also taken to Jersey Shore for injuries. The three injured family members had to be cut out of the SUV and were stabilized by paramedics from inside the wrecked vehicle.

The three victims were reportedly in stable condition. The spokeswoman for the Jackson School District, Allison Erwin stated that the bus was heading to Elms Elementary School at the time of the crash. The children’s parents were notified immediately following the wreck. Elms Elementary school principal and superintendent were at the scene to help.