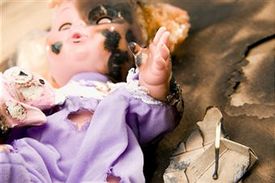 Utica, NY (NewYorkInjuryNews.com) — A morning blaze injured one firefighter and displaced a family in Utica on Sunday, November, 22, 2009 according to Utica Dispatch Observer.

Utica City Fire Department firefighters reported to the scene to combat the flames at the 2 ½ story house located on Oriskany Street around 12:39 p.m. Chief Fire Marshal Raymond Beck reported that the blaze began in a smaller room in the back of the wooden-framed home.

Responding firefighters battling the flames and were able to bring the fire under control around 1:40 a.m. with the only areas of the house that retained extensive damage were the back room and the family’s kitchen.

The firefighter that was reportedly injured at the blaze was Thomas Stark, who sustained a knee injury and was taken via ambulance to be cared for by doctors at St. Elizabeth Medical Center. It was not known how he became injured. His condition remained unclear. Officials continue to probe the fire to determine the cause.

A mother, Annette Baker and her two children were displaced in the fire. They went to stay with family for the time being. Utica fire records showed that the property had been registered and inspected before the blaze occurred. The American Red Cross arrived at the scene to assist the family.