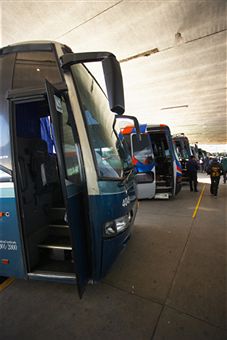 Legal news for Massachusetts Personal Injury attorneys—A pedestrian was crossing the street at an intersection when a PVTA bus struck him.

Springfield, MA (NewYorkInjuryNews.com) — A pedestrian was hit by a Pioneer Valley Transportation Authority (PVTA) bus in Springfield on a rainy Friday morning, November 20, 2009 announced the Republican.

Police reported that the man was crossing the street at the intersection of Main and Liberty when the bus struck him around 7 a.m. Emergency medical services (EMS) rushed to the scene of the accident. Authorities reported that the pedestrian looked conscious but still laid in the street not moving.

A responding police officer held an umbrella over the injured man on the ground until EMS arrived to load and transport the man to a hospital for treatment. Eyewitnesses reported seeing the man cross the street when the traffic light was green before he was struck.

It was also said that both the bus driver and pedestrian hesitated to go before the accident. After the bus struck him, a passerby said that the pedestrian rolled and landed underneath the bus’s bumper. The PVTA bus driver was reportedly very upset after the crash. Both the identities of the pedestrian and the driver were not released.