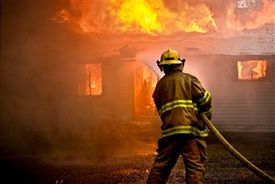 Buffalo Firefighters responded to the fire at 7:14 p.m. The fire had reportedly broke out in the back of the family’s two story house. Firefighters worked to battle the blaze that ripped through a family’s home, and destroying their belongings. The fire occurred on 383 Guilford Street between Genesee and Best Streets, where seven adults and one child escaped the flames unscathed.

As the smoke billowed and the flames continued to devour the home, A Buffalo firefighter was injured amidst combating the blaze. Emergency medical services (EMS) rushed to the scene to transport the injured Buffalo firefighter to a hospital for treatment.

Authorities reported that the ambulance took him to Erie County Medical Center where the wounded firefighter was cared for by nurses and doctors. The extents of his injuries were not known. The cause of the fire was not known and is continuing to be investigated by officials. The damages that the destructive fire and smoke caused will cost around $20,000 damage to the building, and $10,000 for the family’s lost belongings.