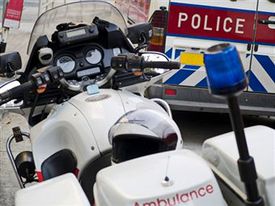 Harborcreek, PA (NewYorkInjuryNews.com) — A motorcyclist was injured in collision with a vehicle on Sunday, November 22, 2009, according to GoErie.com. The collision occurred in Harborcreek at the intersection of Buffalo and Hannon Roads.

Police officials and firefighters responded to the scene of the crash and discovered the motorcyclist on the ground, after colliding with a turning Toyota when the biker ran a red light. Pennsylvania State police reported that the man operating the Harley Davidson motorcycle was identified as 42-year-old Robert Greiner.

The driver of the Toyota was identified as 18-year-old Megan Sczepanski, resident of Erie. Greiner was reportedly launched over the vehicle, and was seriously injured.

Emergency medical services (EMS) reported to the scene to transport the injured man, who was placed in the care of doctors and nurses at Hamot Medical Center. He was reportedly in critical condition and suffered a potential traumatic brain injury (TBI). The crash occurred at 6:35 p.m. reported police. Sczepanski sustained only minor injuries in the crash. Police officials continue to investigate the scene of the crash. It was not reported if the intersection was temporarily closed off.