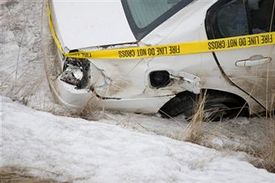 Antwerp, NY (NewYorkInjuryNews.com) – New York State Police reported to the scene of a two-car crash on Thursday, November 19, 2009 on an icy CR-22 road in Jefferson County, announced the Gouverneur Times.

Police from Alexandria Bay arrived at the scene on the icy morning around 7:31 a.m. where one vehicle, traveling west crossed the middle line in the eastbound lanes and collided with another car in the Town of Antwerp. One of the factors that contributed to the wreck was ice on the roadway.

The eastbound vehicle driver that had lost control was identified as 49-year-old Donna Miles, resident of Gouverneur, New York. Emergency medical services (EMS) arrived at the scene to transport Niles who was in a critical and life-threatening condition.

She was taken via ambulance to be cared for by doctors and nurses at Samaritan Medical Center for her severe injuries. Niles injuries proved fatal shortly upon arrival. The driver of the eastbound car was identified as 19-year-old Bridgette Sharlow, resident of Chaumont, New York, who was traveling with an adult passenger at the time of the collision.

Both Sharlow and her unidentified passenger remained uninjured in the fatal wreck. It was not reported if speed was a factor in the crash. New York State Police were aided by Theresa Volunteer Fire Department.