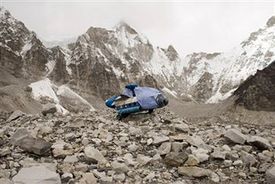 Newcomb, NY (NewYorkInjuryNews.com) – The Federal Aviation Administration (FAA) www.faa.gov is investigating a small aircraft that reportedly crash landed in the Adirondacks Mountains in Essex County, which killed both the pilot and his passenger Sunday, November 15, 2009, announced the Albany Times Union.

Police authorities and FAA officials continue to look into the fatal crash where the Piper Cherokee plane that went down over Santanoni Mountain, a 4, 600-foot peak, 90 miles north of Albany, New York.

A search and rescue mission began Monday after a worried friend of the pilot contacted authorities. The pilot was due to be at an event Monday night, but never showed. The airplane had reportedly taken off and left from Saratoga Airport around 4:30 p.m. in northern New York on Sunday, and was destined to arrive at Malone airport.

The debris and wreckage of the plane crash was located Tuesday morning by state troopers and forest rangers.
Investigators identified the pilot as flight instructor Dan Wills, and his passenger identified as Ron Rouselle. They were discovered dead at the scene about eight miles south of Lake Placid.