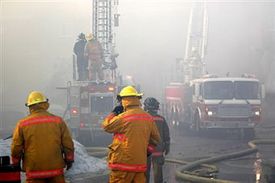 Bethesda, MD (NewYorkInjuryNews.com) – A Montgomery County firefighter was battling a blaze in a Bethesda apartment building, when she was struck by a car on Monday night, November 16, 2009 announced MyFoxDC.

The fire occurred Monday evening at 10320 Westlake Drive in an apartment complex in Besthesda, directly across from the Westfield Montgomery mall. Montgomery firefighters received the call about the fire and responded immediately to the billowing smoke coming from the fourth floor of the small scale apartment.

Authorities reported that the firefighter who was driving the fire engine was retrieving some equipment from the back of the truck, when a car drove straight through the scene of the blaze and struck her. Officials reportedly told the driver to stop, but the driver continued on.

Emergency medical services (EMS) rushed the firefighter to a local hospital where she was cared for by doctors and nurses for her serious injuries. The brave firefighters name was not released. Her condition was critical, but not life-threatening. Officials reported that responding firefighters put out the apartment flames in 20 minutes. There were no other reported injuries.