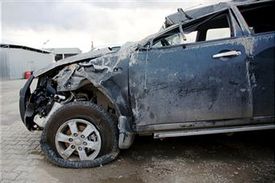 West Friendship, MD (NewYorkInjuryNews.com) – A Sport Utility Vehicle (SUV) was struck when a Honda crossed the double yellow line on a two-lane highway, killing the driver on Thursday, November 12, 2009, announced the Baltimore Sun.

Emergency medical services (EMS) were at the scene to transport the injured to local hospitals. Police reported that the 54-year-old driver of the Cruiser, Gilbert Leon Trowbridge suffered fatal injuries in the wreck, and was declared dead at the scene.

Howard County police identified the driver of the Honda as 20-year-old Min Na Moon. EMS transported Moon to Maryland Shock Trauma Center located in Baltimore to be treated by doctors and nurses for his critical injuries.

Police investigators believe Moon may have attempted to pass another vehicle by driving on the right shoulder of the southbound lane when he then crossed the yellow line.