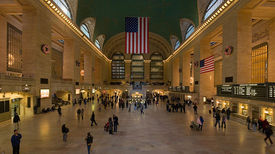 “Eddy” is a 42-year-old asbestos inspector who was injured on the job. Eddy was performing inspection work at the Grand Central Terminal when he slipped and fell on concrete debris and a slippery liquid substance. As a result he twisted his left leg and suffered a severe knee injury that required surgical repair. If you have been unfortunate enough to experience a serious knee injury, you know that it can be a very painful and a life-altering injury that affects your mobility as well as everything you do.

Eddy’s accident occurred in a designated construction walkway, and was not witnessed by anyone because it occurred during the general contractor’s shift change. When Eddy fell he sought help and also attempted to contact the general contractor to report the incident, but no one responded. As an experienced worker, aware of his rights, Eddy made sure the accident was reported and got medical attention.

Pursuant to the New York State Labor Law, the contractor who was performing the work at Grand Central was responsible for the clean up of the debris and slippery substances on the walkway. They are fully accountable for making the walkways in and around the construction area safe. Based on this, Eddy had a case to obtain compensation for his injuries.

In typical fashion when Eddy’s case went to trial, the defense team representing the construction company blamed Eddy for not watching where he was walking and if that was not enough, also tried to blame Eddy’s employer since it was they who sent him to inspect the work (Although they had no obligation to do the clean up work).

The jury found the construction company 100% accountable for his accident and returned a verdict that compensated Eddy for his pain and suffering, along with the expenses related to his knee surgeries.