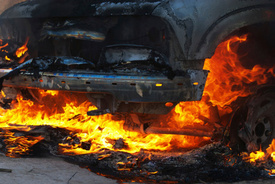 According to officials, a rental Volkswagen Golf veered off the road, traveled about 100 yards on a grassy shoulder before striking a bridge abutment and erupting into flames.

Responding emergency crews pronounced all four of the vehicle’s occupants dead at the scene of the wreck.

The cause of the crash is still under investigation. It is unknown if drugs and/or alcohol were involved.