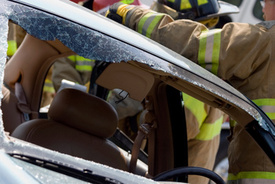 New York, N.Y.—A car that was fleeing from police collided with an MTA bus, leaving 41 people injured on Monday, September 9, 2013. The automobile accident occurred around 4:40 p.m. at Albany Avenue and Herkimer Street in the Bedford-Stuyvesant area, reports CBS News.

According to officials, a Camaro was running from police when it hit several parked cars and ran a stop sign. The car then was hit by the MTA bus.

NYPD attempted to pull the car over, but when the police noticed a gun in the vehicle the driver took off, leading to the crash.

A total of 41 people were injured in the wreck, which included 12 people who were seriously injured and 29 others who sustained minor injuries.

The victims were taken to area hospital for medical treatment by responding emergency medical crews.

Police revealed that none of the injuries were considered life-threatening.

The Jaws of Life was used to extract the occupants of the car by removing the roof.

Investigations into the bus and car accident are underway.