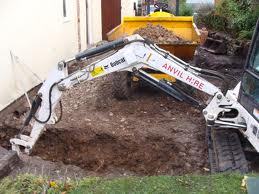 Trenches are dug at almost every construction site in the state of New York, and present an extremely high risk for construction accidents causing injury and death to the workers who toil within them. Alongside the trenches is heavy equipment and uneven or unstable work surfaces. The trenches are used for various purposes, but most often, for the laying of pipes, sewers and electrical wires. There are a myriad of accidents that can occur to the workers excavating a trench. Safety regulations call for precise planning and execution of trenches, along with daily inspection by trench specialists to ensure that the trench is safe for workers to enter.

At a construction site in New York, proper safety regulations must be complied with to minimize the likelihood of trench cave-ins. A mere rainy day can weaken a trench and its supports sufficiently to cause a tragic collapse of the trench, burying the workers, and often times, asphyxiating them under tons of debris including soil, rocks and construction debris. If there is heavy equipment working at the site of the trench, a weakening of the trench can cause the equipment to fall into the collapsed trench, and crush the workers therein. Moreover, trenches are the sites of pipes, electrical wires and sewers pipes, which lend added risk of electrocution and drowning to the workers in the trenches. The construction laws of New York have been passed in an effort to promulgate safety rules that are meant to minimize the risk of these accidents, which often lead to death or severe injuries from which a worker seldom recovers.

Labor Law section 240(1) may apply in a trench accident where an object falls on a worker or a worker falls from a height into a trench. However, equally important to the type of accidents that can occur in a trench, is Labor Law section 241(6), which imposes liability on an owner or general contractor for violation of a safety rule of Art. 23 of the N.Y Industrial Code.”

Mr. Reiter continued: “Along with safety violation causing accidents that often lead to the suffocation of a worker who is buried in a collapse, is the fact that gas and electrical lines are placed in trenches. There are critically important safety regulations regarding these lines that are meant to protect the workers against electrocution, burns and drowning in a collapsed trench. Since a trench is always deeper than it is wide, there is inherent instability in them, which is offset by support structures. The safety regulations require a very high level of vigilance in ensuring trenches are safe for workers, including, at a minimum, daily inspections by trench specialists to determine the safety and stability of the trench.”

The risk to the workers in a trench is so great, that the safety regulations must be complied with to minimize the risk of these tragic accidents.