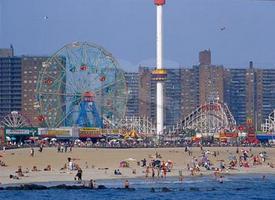 Coney Island, N.Y.—A 5-year-old boy was injured after he jumped off a moving kiddie roller coaster, leaving his leg mangled in Coney Island. The accident occurred on Wednesday, August 14, 2013, around 7 p.m. on the Sea Serpent Roller Coaster at Deno’s Wonderwheel and Amusement Park, reports the New York Daily News.

According to officials, the boy, idenitifed as Pradipla Sutradhar, crawled under the lap-retaining bar and jumped from the ride while it was still moving, as his mother looked on in horror.

It is believed that Pradipla got scared and tried to get off.

Sutradhar’s leg reportedly got stuck between the car and the track, which left serious injuries to his leg. His 8-year-old sister, Aparjila, who was also riding the roller coaster at the time, suffered a minor leg injury.

It appeared that Pradipla suffered a large cut to his left leg as a result. But it is unknown how badly injured Aparjila was.

A full investigation into the accident is underway, including a look into whether there was any equipment malfunction.