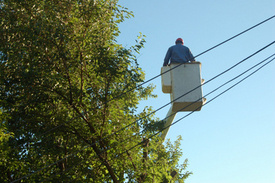 Rye Brook, NY — A Verde Electric employee is recovering after he was injured when a passing tractor trailer hit the bucket of the lift truck he was working on. The work-related accident occurred on Ridge Road and Ellendale Avenue in Rye Brook at about 9:43 a.m., the Patch.com reported.

The 52-year-old Mahopac man was reportedly working on a new traffic light when the passing truck hit the bucket he was in, which caused him to topple out of it. The worker was left hanging from the traffic light until the safety connection failed. The worker then fell on to the top of the passing tractor trailer, where he then rolled off the truck and fell to the pavement face-first.

Responding emergency medical crews rushed the Westchester Medical Center in Valhalla for a broken nose and several broken ribs. He also sustained a broken elbow for which he needed surgery to treat.

The semi-truck that hit the bucket was reportedly driven by a 50-year-old York, PA, woman. She was headed to make a delivery on West William Street when the accident occurred.

No charges are being brought against the woman. The semi-truck, owned by Wastontown Trucking Co. of Milton, PA, did not have any mechanical problems and had all the necessary paperwork.

Rye Brook Police and Port Chester-Rye Brook EMS, and Westchester County Police all responded to the accident and were involved in the investigation.

The U.S. Occupational Safety and Health Administration (OSHA) was also notified of the work-related accident.