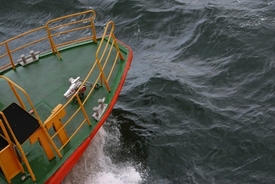 According to initial reports, the ferry was carrying 326 people, including two crew members, when it slammed into the dock and threw the passengers about the vessel.

The ferry originated from Highlands, N.J. and was on its way to Wall Street when the accident occurred.

One of the critically injured people was reportedly thrown down the stairs, where he hit his head on a window when the crash occurred.

It is unknown at this time what caused the ferry to slam into the dock. The impact also left a large gash into the bow of the vessel.

The National Transportation Safety Board (NTSB) is investigating the ferry accident.

Drug and alcohol tests were conducted on the captain and the crew. Everyone had passed the breathalyzer tests, but the blood tests would take several days.