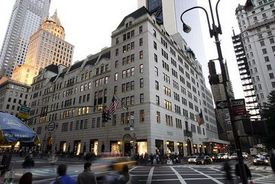 A beautiful, young saleswoman, who stayed late at her job at Bergdorf Goodman’s, was struck and killed while crossing 7th Avenue at the intersection of 59th Street in Manhattan, by a Staten Island bus which was making a left turn. This tragic incident occurred on December 28, 2012, at 8:00 pm in a driving rainstorm. The bus operator remained on the scene, and was not charged. He told investigating authorities that he was making a left turn on to 7th Avenue when he struck the victim. The victim, identified as Aileen Martinez, age 33, from the Bronx, was declared dead at the scene. The bus was identified as an MTA bus out of Staten Island, and was empty at the time of the accident. A relative of Ms. Martinez described her family as being “inconsolable” over their loss. Ms. Martinez was described as a “little woman with a big heart who sent several hundred dollars each month to her mother in the Dominican Republic.”

According to Manhattan pedestrian accident attorney, Jonathan C. Reiter, who has handled many bus and pedestrian accidents, these all-too-common accidents are the result of several factors, working in concert to lead to tragic loss of life. Mr. Reiter stated as follows: “The chances that a pedestrian will get killed by a vehicle turning into the street where the crosswalk is located, is enormous in Manhattan and all New York City boroughs. A pedestrian literally takes their life in their hands when they cross the street at a corner such as where this tragic accident occurred, 7th Avenue and 59th Street.

This accident’s multiple causes include the possibility of driver inattention, and/or excessive speed under the circumstances. Moreover, the circumstances of this accident, include terrible weather conditions and the fact that it was after dark, both factors affecting visibility. Under these conditions, the operator of the bus would be required to exercise a very high standard of care and vigilance in observing the roadway for pedestrians, and operating his bus accordingly.” Mr. Reiter went on to state that the City of New York must do more to prevent these type of accidents, as follows: “The type of accident that occurred here has become all too common, over the years, in New York City. A multitude of traffic studies have been performed as a result of the high number of pedestrian accidents in Manhattan.

Mr. Reiter went on to state: “While numerous traffic studies have resulted in the City implementing safety measures, such as placement of more lights and signals at corners and pedestrian cross-walks, there are recent studies that recommend that cross-walks be moved to the middle of the block, rather than the end of the block, to further protect pedestrians. These recommendations have only been used on a trial basis at a very few intersections located in Manhattan. According to Mr. Reiter, “obviously more has to be done to protect pedestrian traffic, since the tragic loss of life continues at alarming rates.”

The results of these traffic studies will be available as time goes on, to determine if moving crosswalks to the middle of the blocks will result in fewer accidents. Mr. Reiter explains “It stands to reason that if cross-walks were moved to the middle of the block that the pedestrian crossing at that location would have more distance of roadway to protect him from a turning vehicle and the vehicle would have more distance with which to observe the pedestrian and avoid the accident altogether.” Mr. Reiter also explained that “since there are multiple parties that could be held liable in an eventual lawsuit on behalf of the deceased victim, that both the MTA and the bus operator would be named as defendants in a lawsuit seeking damages for this accident. According to Mr. Reiter, “the damages would include any support the deceased was sending to her mother in the Dominican Republic, as well as support that she provided to dependents in this country as well.”

The public can only hope that pedestrian crosswalks can be made as safe as possible by the City of New York, in order to minimize the dangers to life and limb of merely crossing the street, something every New Yorker does multiple times per day. Until the safety plans are implemented fully, each and every New Yorker takes his life in his hands when crossing the street in New York.