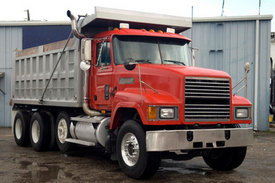 An 11- year old boy was struck and killed by a dump truck one block away from the child’s school on 80th Street in Jackson Heights, Queens. The accident occurred on December 29, 2012 at 8:50 a.m. The operator of the truck then drove away from the scene, without stopping, apparently not realizing that he had struck the child. The boy, Miguel Torrres, was in the crosswalk and had the right of way, police stated. Police sources stated that the driver of the dump truck was not aware that he hit the boy, but that the driver still could be cited for traffic violations. The boy had been on his way to a field trip to Grand Central Station when the accident occurred. Eyewitnesses described the scene of the accident as gruesome, stating that the child was hit with such force that his shoes came off. The 911 first responders were observed to have had tears in their eyes at the sad and tragic scene of a little boy’s body in the roadway. The boy was declared dead at the scene.

According to New York personal injury attorney, Jonathan C. Reiter, who has handled many truck and pedestrian accidents, the fact that the truck did not stop at the site of the accident is a violation of New York State’s hit-and-run statute which make it a felony to leave the scene of a serious accident. Mr. Reiter stated: “The truck has the duty to operate his truck in a reasonably safe manner based on the conditions at the time of the accident, including traffic and lighting conditions of the roadway, as well as to comply with the applicable traffic laws and regulations. The driver of the truck has the duty to see what is there to be seen in the roadway, including the child crossing in the crosswalk, and to exercise caution in avoiding hitting the child. The police investigators are correct in their statement that a person crossing in the crosswalk has the right-of-way, which means that the truck failed to yield the right-of-way to this child, and thereby, was negligent adds Mr. Reiter a NY pedestrian accident lawyer. The fact that the driver of the truck then left the scene of this accident is a violation of criminal law if the driver was aware that he had hit the child. In this instance, the initial police investigation determined that the driver was not aware of this accident, and therefore, he will not be held criminally liable for leaving the scene of the accident.”

The New York Police Department is investigating this accident, as required by law in all fatal accidents in the State of New York, and searching for the driver of the truck. Once the driver is located, his statement(s) to the police will be a major component of the evidence in determining how the accident occurred. As Mr. Reiter concluded, “In this case, we have many eyewitnesses, some of whom may have recorded a plate number. In addition, there are video and surveillance cameras on many street corners, which makes it only a matter of time before the driver is located. At that time, the police will inspect the truck for evidence of collision with the child and take a statement from the driver, in their efforts to determine how this accident occurred.”

In the meantime, and during the investigation stage of this very tragic accident, a little boy, crossing the street near his school to go on a field trip to Grand Central Station, and following the rules by crossing in the crosswalk, was cut down by a tragic twist of fate. It is small comfort to the aggrieved family that all the facts of this accident come to light, so that the negligent party or parties can be held accountable under the law.