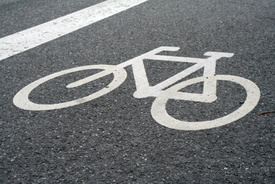 A 38-year-old father of two, riding his bicycle on his usual commute from Jamaica to Long Island City on Queens Blvd in Kew Gardens, was struck and killed in a hit-and-run accident by a truck that was entering the Boulevard from the Van Wyck Expressway exit at 6 a.m. on September 26, 2012. Eyewitnesses stated that upon collision, the bicyclist was thrown 10 feet in the air, landing on his side and back. He was reportedly rendered unconscious by the collision. Emergency crews moved him to Jamaica Hospital, where he was pronounced dead.

Queens Boulevard has been titled the “Boulevard of Death” by New York newspapers for many years, following the high number of fatal accidents involving pedestrians and bicyclists. The City of New York has responded to this high number of accidents, by adding signage warning people of the dangers, and by installing additional cameras to enforce the road rules. While these efforts have reportedly led to fewer fatalities, the fact remains that this roadway is one of the most dangerous in the city of New York.

The case is being investigated by the New York Police Department to determine the identity of the truck and its driver. Furthermore, the results of an accident investigation, which is required in every fatal accident in New York City, are pending.

According to New York pedestrian accident attorney, Jonathan C. Reiter, who has handled many motor vehicle and bicycle accidents, the location of this accident played a key role of the accident. Mr. Reiter states: “Queens Boulevard is a massive roadway built to connect Queens with mid-town Manhattan. It has six lanes, three in each direction, and two service roads, one in each direction. It is called the Boulevard of Death for a good reason. It is an extremely wide roadway, with short ramps for traffic entering from other major roadways such as the Van Wyck Expressway, which occurred in this accident. There may not be enough time and distance for a truck traveling at the high speed that the Van Wyck permits, to slow down and enter Queens Blvd safely. The City of New York has recognized the inherent danger of Queens Blvd, and has addressed the high risks by posting warning signs and additional cameras for traffic rule enforcement.

NYC accident attorney Reiter, while recognizing the City’s efforts in reducing the risk of accidents on Queens Blvd, went on to state: “The design of Queens Boulevard rendered it so dangerous, that there are not enough signs or cameras to alleviate the inherently dangerous condition that exists for people who are walking or riding a bicycle.”

Moreover, Mr. Reiter indicated the following: “while the manner and cause of this accident will be determined by the accident investigation, the truck was the vehicle entering the roadway upon which the bicycle was already traveling, and therefore, should have had ample opportunity to see the bicycle in the roadway, and to avoid the collision. The photographs of the bicycle showed it to be mangled, indicating a direct and massive collision with the truck. In this case, when the police find the truck, they should find clear evidence that the driver could have avoided this very tragic accident.”

The facts of this accident remain to be seen, until such time as the driver is located and the accident investigation completed.