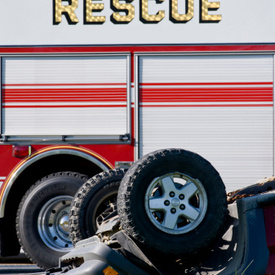 Queens, NY — Five people were killed and three others were injured after an SUV slammed into a concrete pillar early Sunday, July 22, 2012. The fatal automobile accident occurred around 3:15 a.m. on Atlantic Avenue in Queens, reported New York Daily News.

According to reports, a speeding black Mercedes Benz SUV was traveling east on Atlantic Avenue when it blew through two red traffic lights, crashed into a concrete pillar and rolled several times before coming to a rest against a fence and burst into flames.

An FDNY veteran told NY Daily News that, “This is the worst single car accident I’ve gone to in my career.”

Responding emergency crews used three Jaw of Life tools to extricate two boys, ages 7 and 9, from the rear window of the burning SUV.

An 8-year-old girl that was thrown from the vehicle was found dead about 10 feet from the SUV. Three other women also died in the wreck.

One of the three deceased women was found dead, still wearing her seat belt in the front passenger seat. A second woman was ejected from the vehicle, while the third victim was pinned underneath the SUV.

The 45-year-old driver, her 7-year-old son, and 26-year-old man who were ejected from the vehicle were rushed to Jamaica Hospital in stable condition.

Investigations into the deadly crash are underway. Police are still determining if drugs or alcohol played a factor.