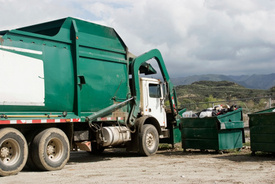 According to the Sheriff’s office, a man was killed in an accident involving a garbage disposal device. The man was reportedly either pinned under or between parts of the machinery, which picks up and dumps garbage into trucks.

The man either worked for, ran or owned a garbage disposal operation.

Details surrounding the accident and his identity have been withheld at this time.

Investigations into the workplace accident are underway. It is unknown if the U.S. Occupational Safety and Health Administration (OSHA) will be conducting an investigation.